On February 23, 2011, the Jazz sent Deron to New Jersey in a multi-player trade. The move caught Deron off guard, but he was welcomed to his new home in New Jersey with open arms.

“Everything happens for a reason; I take everything in stride,” Deron said after the trade. “I had a great five and a half years in Salt Lake. The fans have always been great for me. I’m going to miss them.”

For the Nets, the move was a clear sign that they were working to compete with the New York Knicks for supremacy in the New York market while piecing together a young team that should be playoff competitive for years to come.

“I’m excited because Deron Williams I feel is the best point guard in the NBA,” Nets GM Billy King told the New York Times ”And when you want to try to win, you need a point guard and a center. I think we have two of the best.”

Deron spent most of the second half of the 2010-2011 season rehabbing a wrist injury suffered in Utah, but played in 12 games for New Jersey, showing what he was capable with 12.8 assists and 15 points per game.

After a stint overseas with the Turkish team Besiktas and the end of the NBA lockout, Deron returned to the New Jersey Nets for the franchise’s final season before its much anticipated move to Brooklyn—and D-Will made the most out of his final months in NJ. Deron nearly posted a triple double in the first game of the season. Though the Nets struggled as a team, his individual statistics were stellar. In just 55 games, No. 8 averaged 21 points and 8.7 assists per game, and eclipsed 20 points 28 times.

It was the subsequent offseason, however, when the Nets became the most talked about franchise in the league, making its way to Brooklyn. And as it moved, the team also added a key player next to Deron in the backcourt in All-Star Joe Johnson. Before the two had even played an actual game together, No. 8 was thrilled about he prospect of teaming up with one of the league’s most lethal scorers.

“It’s been fun playing with him,” D-Will said during the offseason. “I’m definitely enjoying playing with Joe. He has a great feel for the game. It should be fun to operate with him.”

Together, along with another All-Star talent in Brook Lopez, Deron looked forward to bringing the Nets to the postseason for the first time since 2007. And they also—like fans all across the city—anticipated the new rivalry with Manhattan’s Knicks.

“People stop me a lot on the streets,” he said, “especially in Brooklyn, coming out of the arena, around the arena, telling us how we need to beat the Knicks. We definitely hear it. We definitely know it’s there.”

Around the All-Star break, Deron grabbed some much-needed rest and underwent platelet rich plasma treatment on his ankles to prepare him for the squad’s second-half run. The results were remarkable. 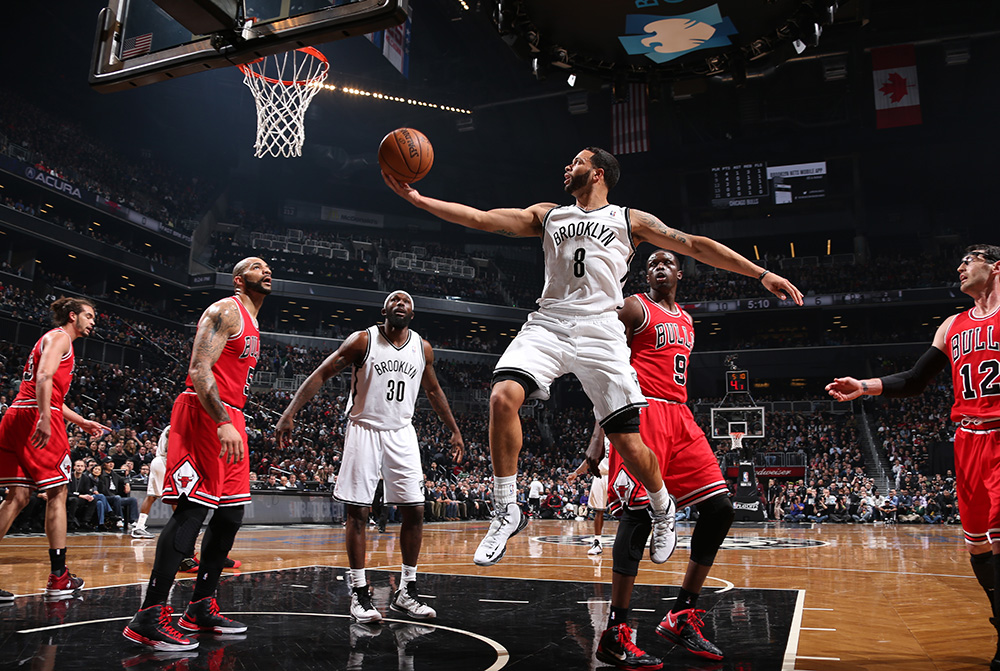 D-Will came back rejuvenated and led the Nets to the playoffs, where they were matched with a tough, bruising squad in the Chicago Bulls. However, even though still battling injury issues, No. 8 wasn’t deterred by the assured physical play that came with the postseason pairing.

The series was decided in a Game 7 classic. Deron dropped a team-high 24 points with seven assists and six board in the Barclays Center, but the Nets simply couldn’t contend with both Joakim Noah and Carlos Boozer down low. The Bulls edged out a 99-93 win and moved on, while the inaugural season in BK came to an end.

After the loss, a heartbroken D-Will praised Noah and the job done by the Bulls in crunch time.

“It’s disappointing,” Deron said. “When we won Game 6, we felt like this was our series. They came out and played a great game. Noah is a warrior. He battled through his injuries and just had a monster game. We really had no answer for him down low tonight.”

After a taste of success in the first year, the Brooklyn franchise was left hungry for even more: The Nets added more veteran talent around D-Will: Paul Pierce and Kevin Garnett. That duo, coupled with Deron, Lopez and Johnson, made a starting five all with All-Star pedigrees. They also added a first-year coach in Jason Kidd, and his addition signaled the arrival of one of the best point guards and brightest basketball minds in the league.

All this had Brooklyn envisioning a long playoff run.

“Those two guys —three guys with (Jason Terry) — are three guys that have won championships,” D-Will said before the season. “They’ve been through it before. They know what it takes. Their leadership, their mentality, just being around those two guys and seeing their mentality and their professionalism will be key for this group.” 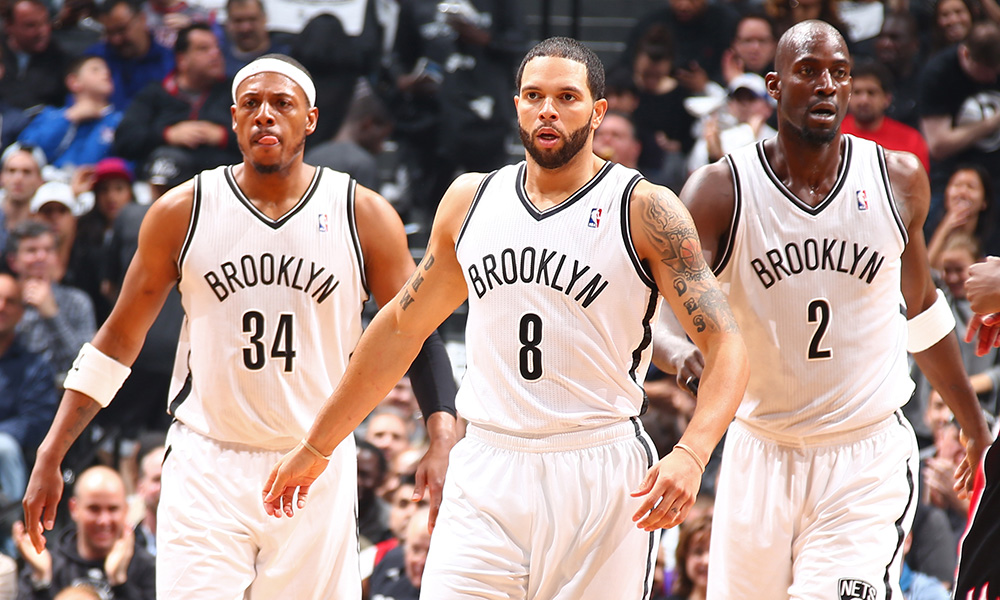 Unfortunately, the injury bug again affected D-Will and those previously realistic championship hopes. No. 8 re-injured his ankle Nov. 15 against the Phoenix and missed 11 games in the early going. He eventually made it back onto the floor, but was forced to fight through debilitating ankle pain throughout the year.

Meanwhile, All-Star center Lopez, who appeared primed for another breakout year, went down with a broken foot in December and missed the remainder of the season. The injuries left the new-look Nets without an opportunity to build any solid chemistry. As a result, the group stumbled to a 10-21 start before the New Year.

But it was when the calendar turned that the Nets turned as well.

Brooklyn started 2014 with an emphatic 95-93 win over one of the NBA’s best in the Oklahoma City Thunder, guided by 29 points from D-Will. The Nets went 10-3 in January and 12-4 in March to emerge as one of the league’s top teams in the second half of the season, going from postseason afterthought to legitimate playoff contender.

In the first round of the playoffs, the Nets once again had a tough matchup. This time, the foe was a young and energetic Toronto Raptors team. In an emotionally charged seven-game series, the Nets prevailed. 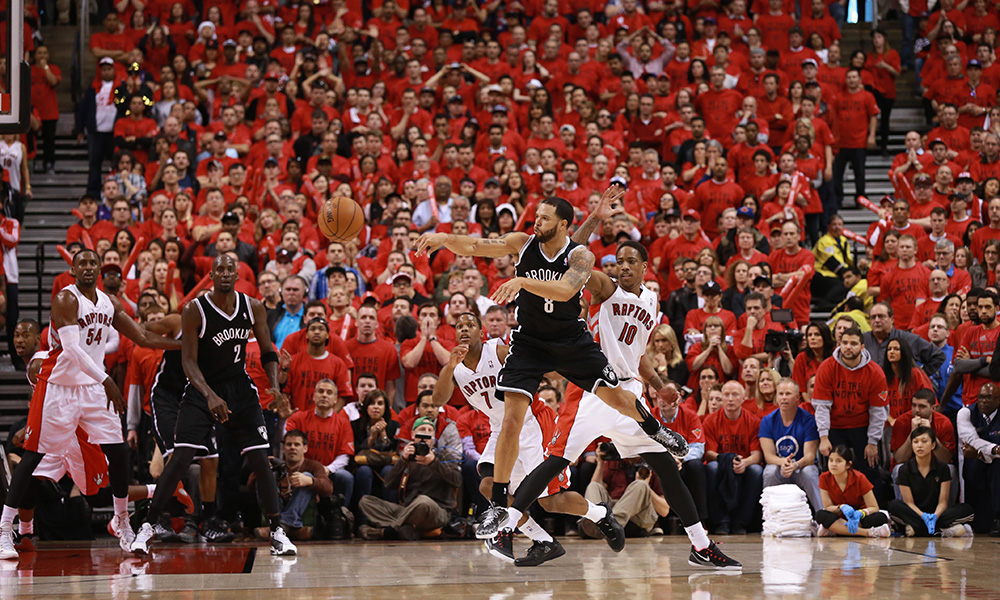 D-Will showed out in a big way in a critical Game 6, scoring 23 points to lead a decisive 97-83 victory, and shift the momentum back in favor of the Nets. Brooklyn used the momentum to come out strong in Game 7 and quiet a raucous Canadian crowd in Toronto, but the young Raptors put together a frantic rally late, making the game 104-103 with just seconds left on the clock.

In the final play, Deron was in defense on Toronto’s young star guard Kyle Lowry along with the two big Net additions: Garnett and Pierce. Lowry managed to slip through a tough double team from D-Will and Garnett, but Pierce was there to clean up with a block, sealing the series victory.

“It’s a great feeling. We lost a Game 7 last year. To be able to turn around and win a Game 7 on the road this year, it means a lot for this franchise,” Deron said after the win. “Two elimination games in a row and we were able to close out the series. It definitely shows a lot about the character of our team.”

In Round 2, the Nets saw an even tougher test: the reigning NBA champion Miami Heat.
After falling in Games 1 and 2 in Miami, the Nets bounced back with a big win in Brooklyn. However, that was the only win the Nets managed in the series.

Each of the next two games ended in utter heartbreak for Brooklyn. The Nets were either winning or tied going into the final minute of both games, but they fell short in both, ending their upset bid and their season. Though the campaign ended earlier than he hoped, D-Will was left proud of the job done by the Nets to overcome several injuries and a rough start to come through with a strong showing in the postseason.

“We started off really bad and to end up where we were without Brook, who was a big part of what we wanted to do this year, says a lot,” Deron said. “We fought back, we hung in there, you know, and a lot of people were counting us out.”

After the 2013-14 season, D-Will underwent offseason surgery on both ankles. While it made for a long offseason for No. 8, he was confident that the procedure and rehabilitation would leave him poised to make it back to an All-Star level.

“I take my job serious, I work hard in the offseason, I work hard every day. It’s just real frustrating not to be able to play how I’m capable of playing…I used to feel like I was the best player on the court, no matter who we were playing against. I’ve gotta get back to that.”