Deron entered the 2005 NBA Draft widely regarded as one of the top two point guards available. The other was Wake Forest’s Chris Paul.

The Utah Jazz traded up to the third pick in the draft and had a decision to make: Deron or Paul? They chose D-Will. He would be following in the footsteps of Utah legend John Stockton, but the Jazz made it clear from the outset that he was not chosen to replace him.

“When we’ve had good point play we’ve played pretty well,” Sloan said. “We don’t expect him to be John Stockton. We expect him to be who he is and have the opportunity to do what we think he can do.”

From the jump, D-Will knew exactly what he needed to do.

“It doesn’t bother me at all,” he said of the higher expectations at the point guard position in Utah.

“John Stockton is who he is. They will not forget about him in Salt Lake City or Utah. I’m just trying to be me.”

Deron would not be expected to assume the starting point guard job immediately either. He started the season as a reserve as Sloan offered a chance for him to get his feet wet.

He made his debut on November 2nd, 2005 during the Jazz season opener against the Dallas Mavericks, and started with a bang. After entering late in the first quarter, Deron scored 18 points, including a 61-foot three as time expired in the third quarter. Sloan rewarded him by allowing him to play the entire fourth quarter and he rewarded that trust by leading the Jazz to a come-from-behind win.

Deron went on to excel in the reserve role over the first eight games of the season, averaging 12.3 points and 3.8 assists per game in just 25.4 minutes per game. On November 15th in Sacramento, Deron made his first start of the season. He started the next 19 games for the Jazz and 47 in total over the course of his rookie season. He bided his time between starting and coming off the bench and even filled in for the Jazz at shooting guard when injuries struck. 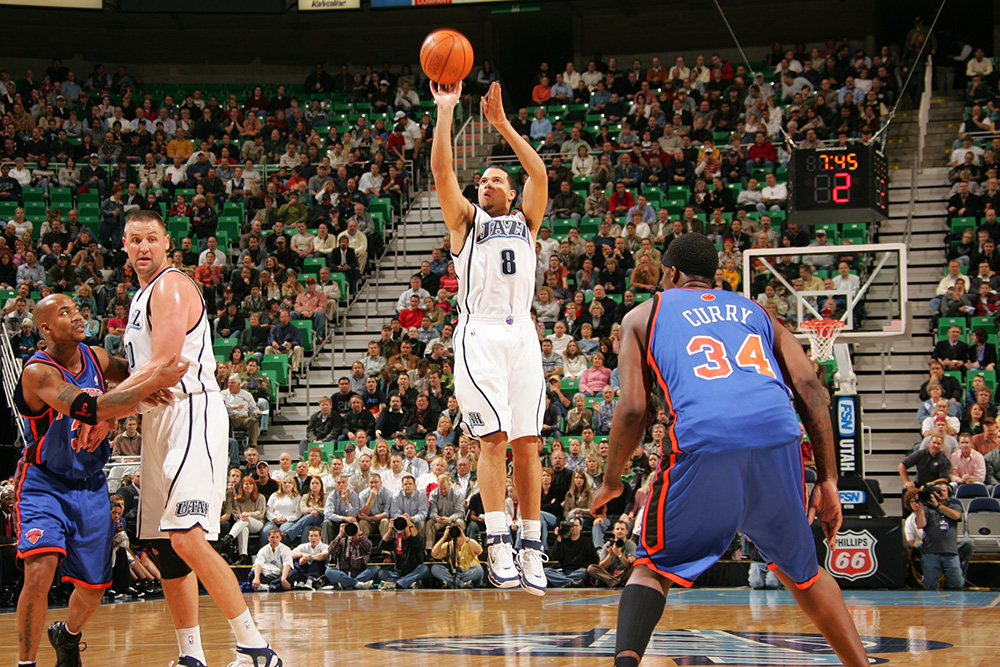 Thanks in large part to Deron, the Jazz finished 41-41, a 15-game improvement over the year prior. D-Will finished the season averaging 10.8 points and 4.5 assists per game in his first season. He made the NBA All-Rookie First Team and was runner up for the Rookie of the Year. He also left a lasting impression on his peers.

“He’s a great competitor and is tough,” Steve Nash said of D-Will. “He’s more than ready to play at this level.”

With that first year under his belt and respect already earned throughout the league, Deron gained confidence that allowed him excel in year two in a starting role for the Jazz.

“I had a productive summer, worked hard, got in the best shape of my life,” Deron told the Dallas Morning News. “My confidence level is definitely 10 times higher than it was last year. I’m out there playing free, not worrying about if I make a mistake, I might have to come out or this or that. I can just go out there and play.”

The Jazz brought in veteran point guard Derek Fisher to ease the transition, but D-Will started each 80 of the games he played in during the 2006-2007 campaign. He rewarded Utah’s commitment to him with a breakout season, averaging 9.3 assists per game, second in the NBA. He also managed 16.2 points per game, third on the team.

The Jazz reached the playoffs, and after beginning with two straight losses to the Houston Rockets, rebounded to win four of the next five games and take the series in seven. D-Will finished the series averaging 16.3 points and 8.4 assists per game. He dominated the final game of the series, playing 45 of the 48 minutes, and posting 20 points on 7-of-13 from the field along with 14 assists.

The star-making performance forced TNT’s Charles Barkley to proclaim: “Deron Williams is going to be a household name.” 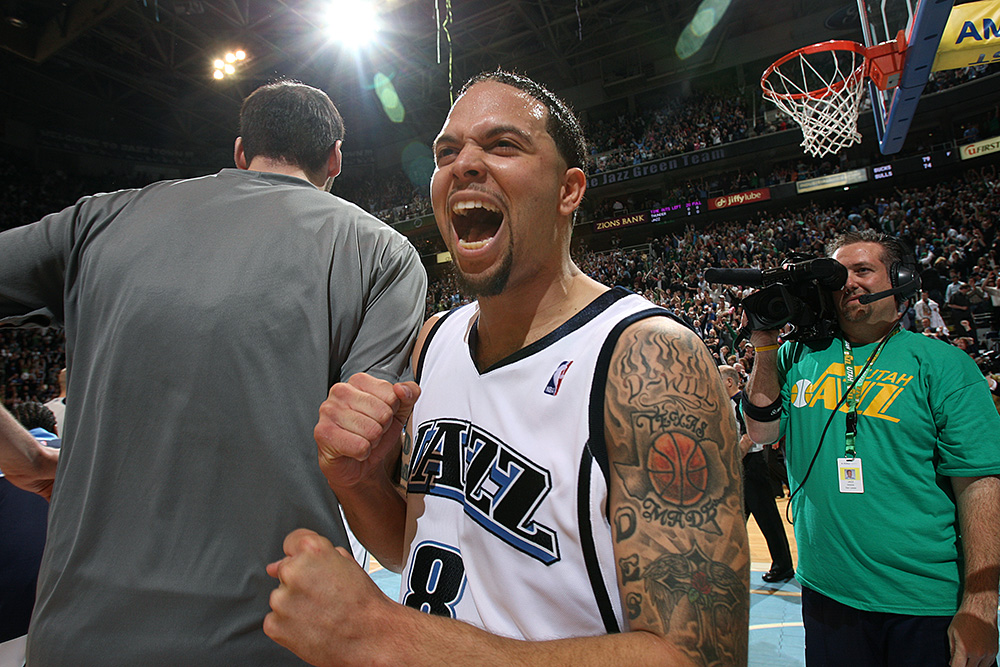 As the level of intensity rose in the 2007 playoffs, so did Deron’s game. The Jazz matched up with the Golden State Warriors in the Conference Semifinals, and D-Will left his mark on the series from the get-go with 31 points on 11-of-21 from the field in Game 1. He added eight assists as the Jazz took a 1-0 lead with a 116-112 win.

Behind Deron’s electric play, Utah advanced to the Western Conference Finals with ease, dispatching Golden State in five games. Deron finished the series with 16.8 points and 9.6 assists per game.

“As a point guard, you have to be sort of a silent assassin in a lot of ways,” former Dallas Mavericks point guard Derek Harper told the Dallas Morning News regarding Deron during the 2007 playoff run. “You have to have that kind of attitude. That’s his attitude. It’s very deceiving from the standpoint that he looks almost like he’s shy and quiet, but he has a killer instinct inside of him.”

The Jazz matched up with the eventual NBA champion San Antonio Spurs in the West Finals, where they fell in five.

“He’s already become, I think, one of the best in the league,” Popovich said. “He gets more and more comfortable every month or so. He’s going to be one of the top point guards we’ve had for a long time.”

ALL STAR AT HOME

For the first four seasons of his career, Deron had established himself as one of the league’s premier point guards.

Following his rookie year, D-Will ranked in the top three in the league in assists for each of his next three seasons. But it wasn’t until year five, the 2009-2010 season, that D-Will was finally recognized as an NBA All-Star.

“It really makes no sense.It shouldn’t be (his first time). It makes no sense. He should have been in for a while,” Bryant said. “He’s one of the two best point guards in the world, period.”

But Deron believes that not being selected for those first four seasons served a positive purpose.

“I think being overlooked and overshadowed helped me,” he said during All-Star Weekend. “It made me work harder. It made me play harder and get better.” 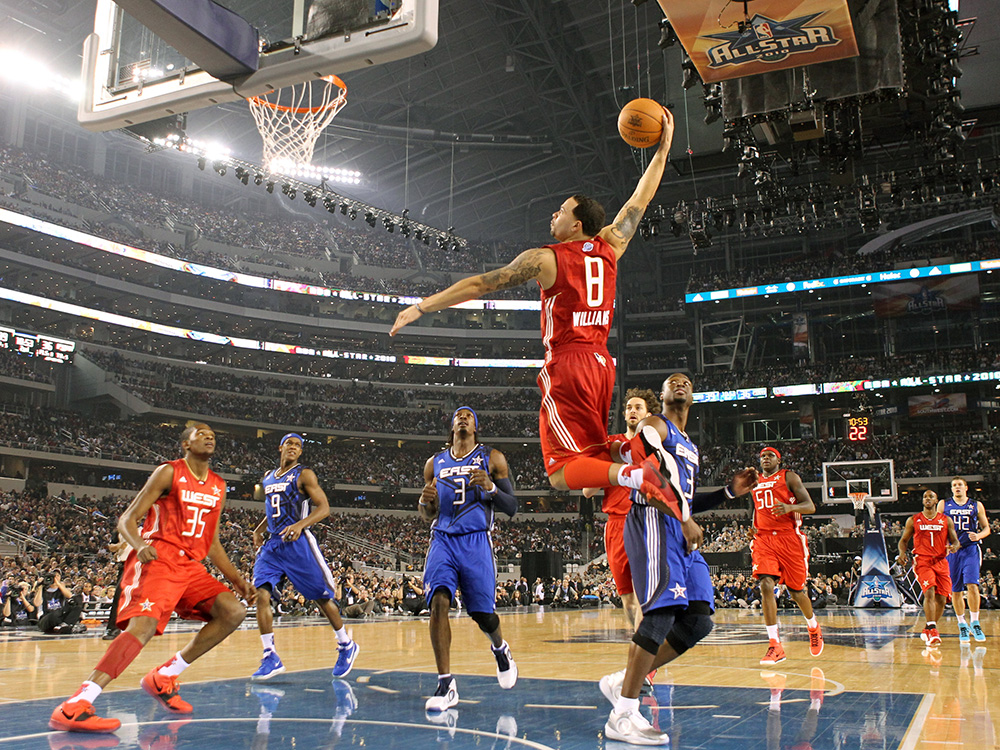 D-Will finished the 2009-2010 season in true All-Star form, averaging 11.6 assists and 18.7 points per game to lead the Jazz to the fourth playoff appearance in his five years in Utah. Once the Jazz reached the postseason, Deron turned it up a notch in their first round series against the Denver Nuggets.

He averaged 25.8 points and 11.3 assists per game as the Jazz ousted Denver in six games. The Jazz moved on to the Western Conference Semifinals, where they met the eventual NBA champions, the Los Angeles Lakers. D-Will did all he could, posting 22 points and nine assists per game, but the Jazz were knocked out in four.

With Carlos Boozer having departed the Jazz for Chicago via free agency, Deron picked up more of the scoring load in his sixth season in Utah. He earned his second straight All-Star nod by averaging a career-high 21.4 points per game in the first half of the season.

“The sky is the limit for him,” Jason Kidd said. “He gets better each year. The biggest thing for him is trying to help his team win the championship, and that’s easier said than done. Sometimes you just have to be patient. I think if he keeps working on his game, he’s going to be the best.”

But just three days after his second consecutive All-Star appearance, Deron’s tenure in Utah came to an end.