As his basketball career was getting ready to take him to college, Deron was becoming a man. There was no bigger moment in that process than when Amy gave birth to their daughter, Denae, in February of 2002.

Deron was just a freshman at Illinois at the time, but he grew up quickly. While he lived in the dorms at Illinois, Amy would often make the 800-mile trip to visit and make sure Denae got to see her dad.

“The first two years were hard, because I would always miss stuff with my daughter,” he said. “First words. The first steps.”

But both Amy and Deron knew how important it was for Deron to get an education, and see how far basketball could take him as a career. Meanwhile, D-Will was excelling on the court and in the classroom.

His successful start garnered Deron interest from USA Basketball and he was selected along with Illinois teammate Dee Brown to the 2003 USA Basketball Men’s National Junior Team. The duo helped Team USA to a fifth place finish with just one loss in the junior national tournament in Greece.

The experience pushed Deron to come back to Illinois even better in his sophomore season. He was also under a new coach in Champaign. After Self left Illinois to take the head coaching job at Kansas, the Illini named Bruce Weber the head coach. 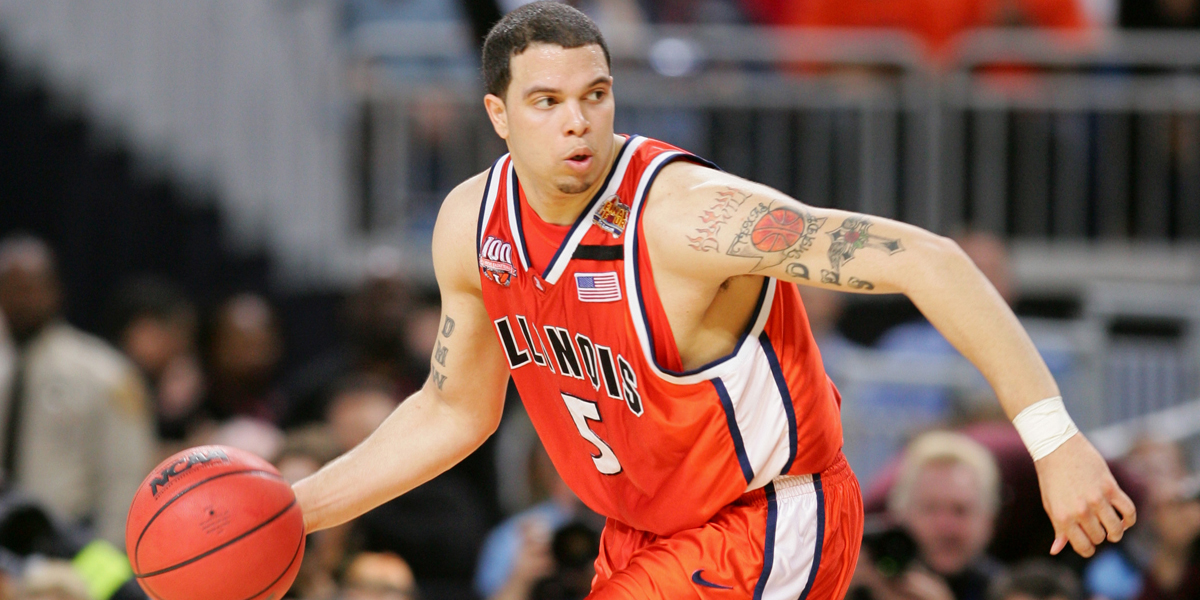 In his second season in Champaign, Deron led the Illini in scoring at 14 points per game, eighth in the conference. He also led the Big Ten in in-conference assists for the second straight season, becoming only the third player to do so in his first two seasons in the conference along with Magic Johnson and Bruce Douglas. Illinois finished as the regular season Big Ten Champion and was runner-up in the Big Ten Tournament.

In the first round of NCAA Tournament, Illinois pounded Murray State 72-53 behind eight points and eight assists from D-Will.

In the second round, Deron went off, pouring in 31 points to go along with seven assists as the Illini defeated the Cincinatti Bearcats to advance to the Sweet 16. The victory set up a Sweet 16 showdown with top-seeded Duke.

But that was where their tournament run would end. Still their was hope on the horizon for the Illini after a strong first season under Weber.

TAKING THE NATION BY STORM

Expectations were high on Deron and the Illini entering his junior year, so to give him a more steady home life, Amy and Denae moved to Champaign.

With his family in place, Deron was set for his best year yet. He was picked as the Preseason Big Ten Player of the Year and named to the prestigious watch lists for both the Wooden and Naismith awards. Playboy Magazine chose him as a Preseason All-American.

By December of 2004, after a dominant win over Wake Forest, the Illini were the number one team in the nation. They rolled through to the best start in school history and won 29 consecutive games before falling in number 30 to conference foe Ohio State.

At the center of it all was Deron, who played every game and was third on the team in scoring at 12.5 points per game and first in the conference in assists, at 6.8 per game (11th in the nation). He became the first player ever to lead the Big Ten Conference in in-conference assists each of his first three years in the Big Ten.

“Deron runs our team,” Illinois coach Bruce Weber said. “His feel for the game is uncoachable. With his numbers, it’s unbelievable that people are talking about him as national player of the year, because he doesn’t have staggering numbers. He just makes us go. He’s not caught up in points. He’s caught up in getting the ball to the hot hand. If there’s no hot hand, he knows when to take over.”

“He’s just one of the elite kids. He’s a special breed who has a special feel for the game.”

“Deron Williams deserves every bit he gets,” Michigan State coach Tom Izzo said during the 04-05 season. “