Over the course of his NBA career, Deron Williams faced myriad challenges, and when the chips were down he always did what he could to step up to the plate.

On this date, in Game 6 of the 2014 Eastern Conference first-round series between his Brooklyn Nets and the Toronto Raptors, Deron did just that, on an injured ankle to keep Brooklyn’s season alive.

“Deron showed a lot of heart, a lot of grit,” teammate Kevin Garnett said. “He was beat up a little bit but he sucked it up and got through it. My hat goes off to him. He could have took another route you know? But that’s our leader. I thought he showed great poise and he gritted through.”

One of the biggest challenges of Deron’s career came when the Nets moved from New Jersey to Brooklyn. D-Will signed a lucrative contract to relocate with the team and with that move came a high degree of expectation. In his and the franchise’s first season in Brooklyn, they made the playoffs but were ousted in the first round by the Chicago Bulls. Year 2 came with reinforcements with a championship pedigree, in the form of a new coach, Jason Kidd, and new players Garnett and Paul Pierce.

A first-round exit simply wouldn’t be good enough for that squad. But that’s exactly what Brooklyn was staring at entering Game 6 down 3-2 in the best of seven series. So with the season on the line, D-Will stepped up and delivered one of the signature performances of his Brooklyn career.

Despite suffering an ankle injury early in the third quarter, D-Will played 38 minutes and scored 23 points — including a dagger three with just over a minute to go — to lead the Nets to a 97-84 victory over the Toronto Raptors in Game 6 of their first-round playoff series. Brooklyn’s win forced a Game 7 in Toronto two days later, which the Nets won to advance to the second round.

“Tonight was a great team win, led by Deron. He really set the tone on both ends of the court,” Pierce said after the game. “I think that just opened up things for everybody.” 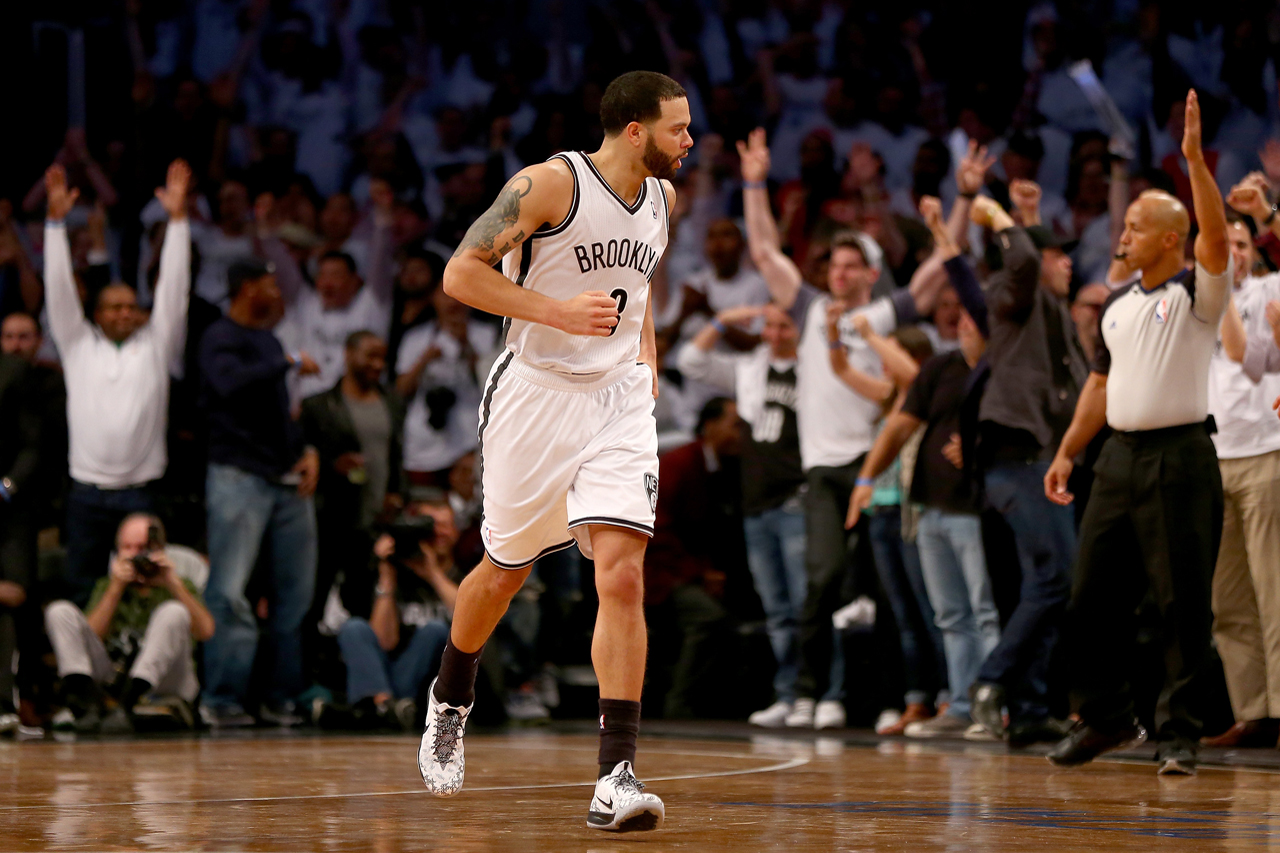 No. 8 mashed the pedal to the metal midway through the first quarter when he created his first bucket of the game with a drive for a nifty reverse layup. Moments later, after Alan Anderson pulled down a defensive board, D-Will got the Nets out in transition and used a Pierce screen to create an open three from the left wing, which he buried to put Brooklyn in front 14-8 and force a Toronto timeout.

“I knew I needed to be more aggressive after the last two losses,” Deron said. “In the three games we’ve won, I’ve been really aggressive, getting into the paint, making things happen, not only scoring the ball but making the extra pass. I know that’s what my team needs me to do so I kind of wanted to come out early an establish that.”

Brooklyn pushed the tempo throughout the opening frame, creating a double-digit lead that went as high as 16 in the early going and they settled in with a 34-19 edge after one.

“I like to play an up-tempo style of basketball, so when we can get some stops and get the ball out in transition,” Deron said. “I definitely think it suits my style of play, but I also think it helps our offense when they can’t set up their defense and we move the ball really well.”

Twenty seconds after he returned to the floor early in the second, Joe Johnson fed D-Will for a jumper that pushed Brooklyn’s lead back to 15. That kicked off an 11-3 run, during which Deron had a hand in nine of the Nets points. At halftime, the Nets held a 60-41 lead, their largest first-half point total of the series. Deron led the scoring charge with 12 first-half points. 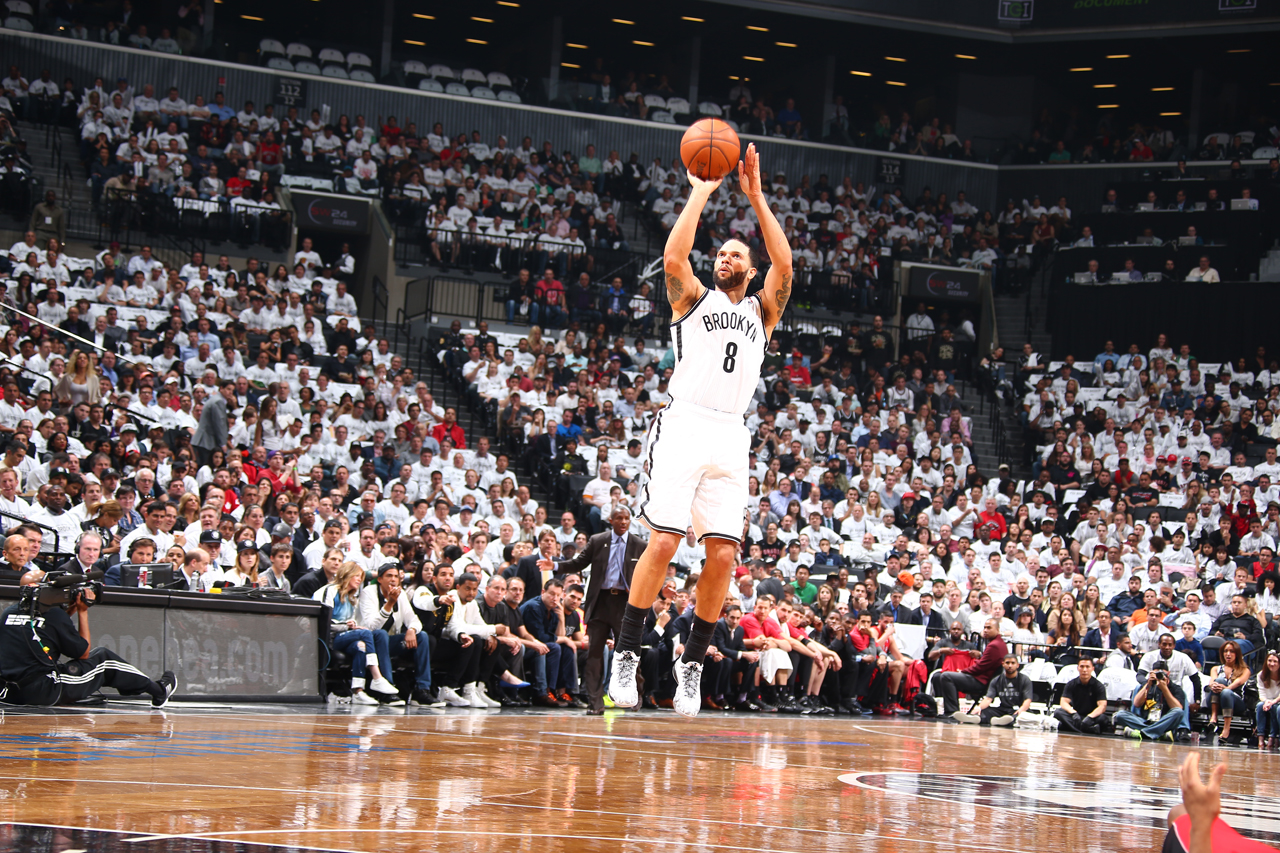 After the game, Kidd lauded the play and professionalism of his point man, who had been the subject of much criticism in the lead up to Game 6.

“This just shows what type of player Deron is and what he is about,” the Nets coach said. “He stood up to whatever was said and responded with one of his best games.”

D-Will continued his aggressive play in the third quarter but it nearly cost him.

As he drove through the lane at Toronto’s Terrence Ross early in the quarter, the two players’ feet got tangled and Deron landed awkwardly on his left ankle. He yelled out in pain and was down on the court for over a minute before getting up and appearing to be unable to put weight on the ankle.

“I just twisted my ankle. I was coming down, going to the basket. I don’t know if I stepped one somebody’s foot or not, but I just rolled my ankle,” he said. “I got it pretty good.” 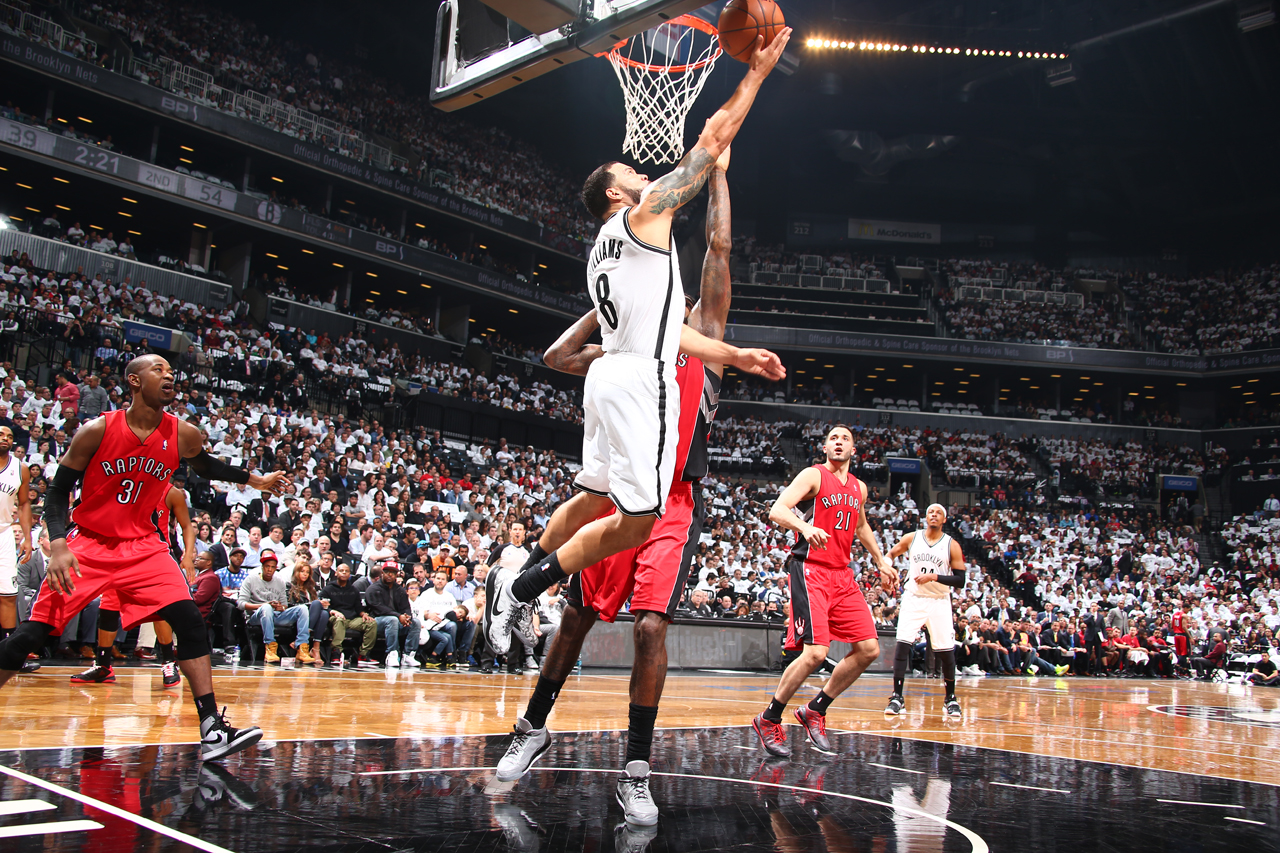 As teammates tried to help Deron back to the sideline, Kidd came out to remind them that D-Will was fouled on the play and if he did not take the subsequent free throws he could not stay in the game.

“If he had to come out, I didn’t want him to walk all the way over to the bench,” Kidd said. “I wanted to keep him walking around and also shorten his walk. We wanted him to shoot the free throws and then we were going to foul if we had to [get him out].”

With that in mind, Kidd called a timeout and during that timeout, Deron walked around on the injured ankle, then walked back to the huddle and declared himself fit to continue. D-Will made one of his two free throws, but told Kidd that the team did not need to foul and he could continue on in the game.

“I just wanted to stay in there. I was able to kind of walk it off. I think that’s the best thing [to do],” he said. “If I would’ve went and sat down, I would’ve set it back and it’s hard to come back out after that.”

It didn’t take No. 8 long to prove he was OK. Just one minute of game time after the injury, he took a feed from Anderson and buried a corner three to push Brooklyn’s lead to 23 points.

“Deron showed that he’s a warrior. He sprains his ankle, comes back, shoots the free throws and doesn’t want to come out of the game,” Kidd said. “I think that just shows leadership and toughness. That’s what he did tonight for us.”

Deron Williams is a tough dude

Deron Williams returned and nailed a 3. He’s rising to the moment tonight.

Oh no he didn’t..D-Will knocks down a corner 3, hop off his injured leg and the Nets are up 68-43 #NetsvsRaptors

Kidd give Deron as much rest time as he could in the fourth, but when the Raptors managed to cut Brooklyn’s lead to 11 with 7:40 remaining in the game, he had to bring D-Will and Johnson both back in. The duo managed to stabilize things for the Nets, mostly on the defensive end, where No. 8 starred all night, limiting Toronto’s Kyle Lowry to just 11 points on 4-of-16 from the field.

“He really got up on Lowry and made him drive,” Pierce said. “And he went back at him on offense.” 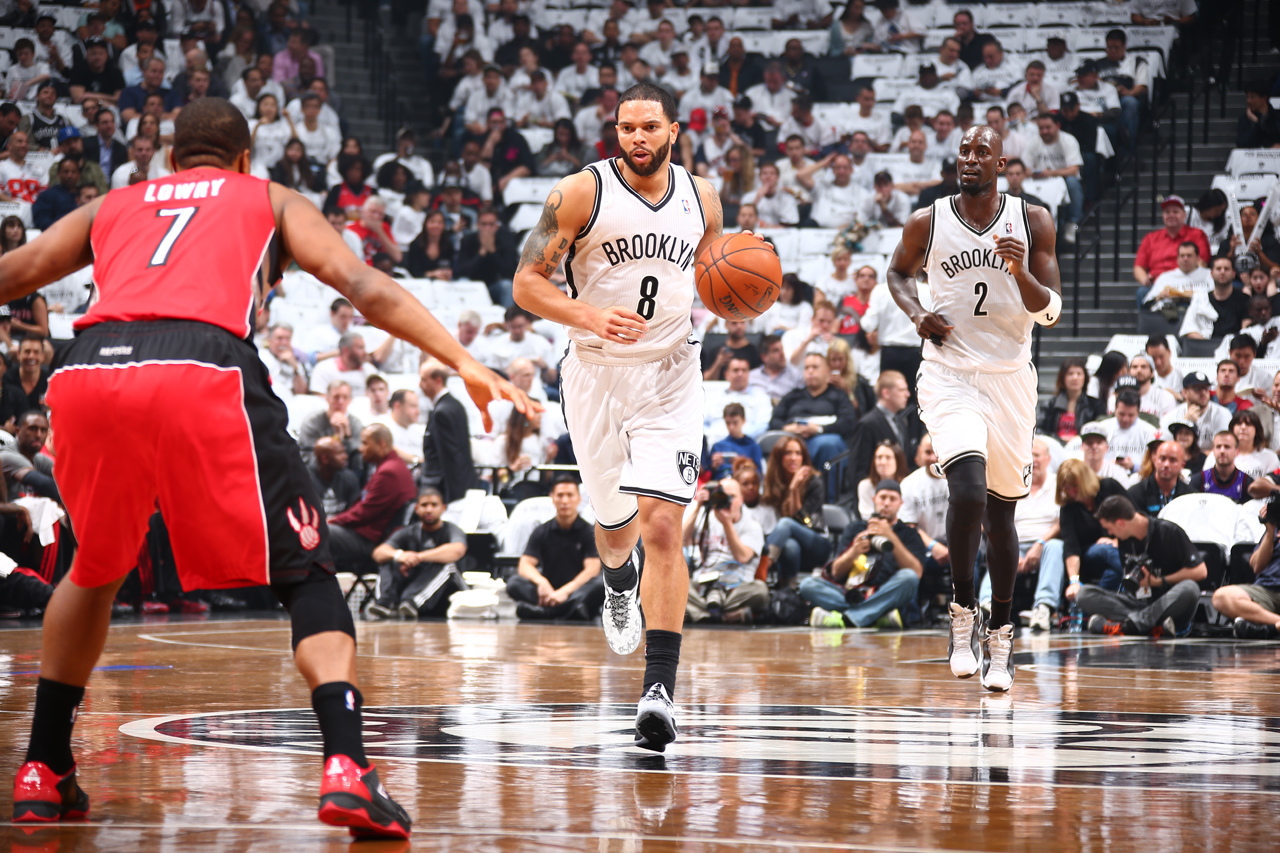 Still the Nets did need one last dose of offense from D-Will after Lowry’s driving layup cut the lead to 10 with 2:49 to go. During a Toronto timeout a few seconds later, Kidd drew up a play that would get the Nets that last basket they needed.

After a Toronto miss, Deron took the ball across the halfcourt line and dished to Johnson along the perimeter. The two ran a pick and roll that didn’t work, and Johnson dished off to D-Will, then set a screen that got D-Will loose. No. 8 then dribbled above the screen of Toronto’s Patrick Patterson and got to the right wing where he was wide open for a trey that hit the back of the rim and went down with 1:13 remaining, effectively ending the Raptors hopes for a comeback.

Huge credit to @DeronWilliams after that ankle roll. Defended well, scored some clutch points including the dagger!

Deron Williams, you came up BIG tonight. Thank you and please be ok and ready to go for Game 7 #Nets #Brooklyn

Proud of @DeronWilliams tonight. He did it #ForBrooklyn. Game 7 is ours.

The Nets went back to Toronto for Game 7 and survived a physical affair to win 104-103 and pull out their first series win in Brooklyn. However, that was the peak of D-Will’s time with the Nets. They went on to get swept in the next round by the eventual Eastern Conference champion Miami Heat and Deron spent just one more season in Brooklyn before his contract was bought out. The Nets have yet to win a playoff series since, though the franchise is on the rise with a 2019 playoff appearance to their credit.